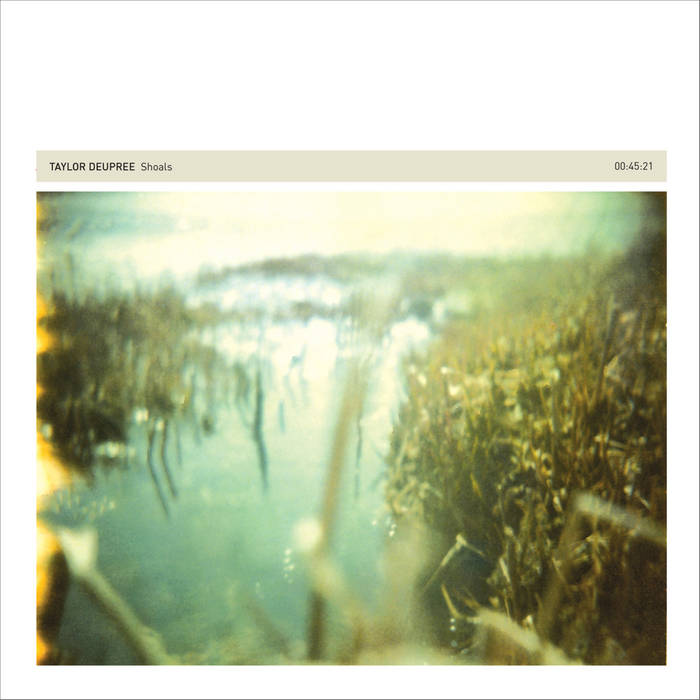 Almost 3 years have passed since the release of Northern, Taylor Deupree’s last proper full-length album on 12k. For Deupree, Northern was a particularly personal work, with the added pressure of following up what many considered to be his seminal album, Stil. By many accounts, Northern was even more widely praised than its predecessor and set Deupree on a path of a more tactile organic sound. Since Northern, Deupree has released a number of short solo works: Sea Last (12k2011), 1am (12k2004), and Live1:Mapping (12k3006), as well as the remixed reissue of Northern (12k2009). These works have seen Deupree incorporate more acoustic instrumentation into his sound world, culminating with Weather & Worn (12k2012), which not only saw its release on vinyl (a first for 12k) but was also Deupree’s first work created without synthesizers.

The path then had been laid for Shoals, an album referencing the sonic and emotional world that can be discovered by scraping away surfaces to reveal a worn interior of comfort and time.

Shoal: a sandbank or sand bar in the bed of a body of water, especially one that is exposed above the surface of the water at low tide.

Shoals is perhaps Deupree’s most specific album in material concept and sound. In late 2009, he was invited to an artist residency program at the University of York (UK) Music Research Center. He was given the freedom to create a project with the resources of the University and staff at his disposal. The idea was to find a unique idea that he would be unable to realize in his own studio – and this was when he discovered the University’s extensive collection of Javanese and Balinese gamelan instruments. Without hesitation, the groundwork was established for his project at the residency: he would create an album using only these instruments by developing a simple yet powerful audio looping program in the Kyma programming language to capture it all and provide the structure for the finished pieces.

After the first day in the studio, Deupree quickly realized that he was less interested in the traditional ways these instruments were played and more fascinated by the sounds of the surfaces of the instruments. And so he began to utilize their edges and undersides and find their flaws, such as broken strings. These instruments, played by scraping, tapping, or with an eBow, became the basis for long and meditative looping beds of sound. In addition, the microphones in the studio would by accident occasionally pick up the sounds of Deupree moving around, brushing the edge of an instrument or setting down mallets. These incidental sounds became as important as the instruments themselves and lend an incredibly physical element to the recordings. Much of Shoals is the sound of microphones in a room as Deupree loops and composes live.

The software Deupree developed in Kyma allowed him to very simply layer loops and change pitches of his sounds, often transposing them down 2 or 3 octaves to further emphasize the cracks and fragments. After recording many hours of densely layered loops during the residency, Deupree returned to his 12k studio and finessed the works into the 4 tracks on Shoals, each based around one of the loops.

The result is an album that has the slow pace of Stil. mixed with the acoustic imperfections of Weather & Worn and the randomness of Occur. Particles of percussive sounds – bells, wood, mallets – are caught by the loop and repeated into a hypnotic underbelly that is coated with a loosely strung Celempung droned by an eBow. The unexpected and almost playful sounds of the instruments’ natural surfaces and room sounds are in stark contrast to the smooth tonal melodic elements, yet together they create an immersive space that seems to offer a microcosm of exploration.

Given the strict instrumental concept Deupree placed on himself, Shoals is certainly one of the most challenging and singular visions he has created. Abandoning any hint of the “pop” elements that have sometimes crept into his music in recent years, he has combined the structure of his past with the sounds of his present to create a truly warm and alluring album (that Deupree recommends for night-time listening) that connects the floating dots of his most important work into a cohesive and definitive statement.